John Sherman Hoyt of Darien, was a wealthy industrialist and dedicated Scouter. Hoyt 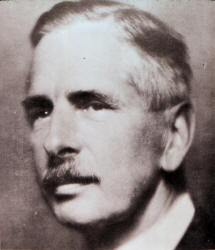 was involved with the scouting movement since 1910 as one of its founders and later served as National Council Vice President for Finance, a member of the National Council Executive Board and Advisory Board.Hoyt had a large estate on Continent Island in the Tokeneke section of Darien. During the 1920’s and 1930’s Mr. Hoyt would allow Darien Scouts to camp on an island off of his estate. The Camp became know as Treasure Island and served as a Summer Camp. John Sherman Hoyt helped to finance the building of the original Darien Scout Cabin in 1926 . In 1947 he donated 18 acres of land to the Alfred W. Dater Council, which became the Five Mile River Camp. The camp was later sold. In 1966 the current John Sherman Hoyt Reservation, 174 acres was donated and named in his honor. The reservation has been operated by three different councils. Alfred W. Dater Council merged to form Fairfield County Council in 1972 and merged again in 1998 to form the present Connecticut Yankee Council.

Historical Records from the National Office, Boy Scouts of America